Julian has suggested putting together a list of our bunch, who travelled through the school together and left in 1967 or 1968. I can start threads for other years as demand arises.

Here's a photo of some of us; date uncertain, probably 1965. 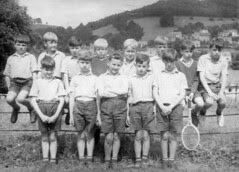 Was there a Hicks? Coley?

These names may be from another school anothter time

Coley rings a bell, but maybe he was in another year, or left early?

I don't think I remember Hicks.

Kirk was a few years behind us

There was a Cullen, small chap

Coley, I remember in the school play, 1066 and all that, he was dressed him up as a girl

Here's a link to a photo of Graham Kirk.

O Tempora o mores!
What a pleasure to see you all wanting to re-share all of those good times as, no doubt, we all approach grandfatherhood, if we're not there already!! Were there any bad times? Really?
I'm posting here as my name is mentioned in this section, but I will be adding memories which I still have as fresh as the day I met Stouts Hill, in 1963, (to July'68), though my brother David preceded Malcolm (twin) and me by 6 years.
Keep going, and spread the news.

Grandfatherhood, not yet! I married late. My son's 7th birthday was last week.

David Quinn, David Povey, David Cameron, William (Bill) Annandale, Naveed Iqbal, (first name), Malcolm Mills, (my bro')...
My living memory of our host, Jonathan, is in the bathroom opposite Matey's rooms, him leaning over a basin of hot water, up to his elbows, staring at nothing in particular, and telling me his Dad worked in Air Traffic Control in Kano, Nigeria. On my FIRST DAY at school, I ask you!!
Jonathan, if that's not true, you owe me a lunch!!

Ian Wallace, one of the "mothers" in Salad Days

Most of the people you mention (apart from your brother) were I think in the year after mine: what I'd call the class of 1968/69.

As for the first-day-at school anecdote, your memory is amazing. Of course I don't remember telling you anything about my father, but yes, he was an air traffic controller in Nigeria at the time. But he was at Lagos Airport in 1963. Later he worked at Kaduna but never at Kano.

If you want lunch, I'm in Sant Pere de Ribes, south of Barcelona. Come and get it!

If you listen to Pink Floyd's Dark side of the moon album (as some people have been known to do), you may hear an airport announcement partway through, of a flight leaving for Rome, Kano, and Lagos. I used to take that flight.

Thanks, Julian. Jeremy Klinger and Donald Wynn sound right. I thought Klinger was either Jeremy or Joseph.

Ian Wallace? Doesn't ring a bell. Does anyone else remember him? Was he really in my year?

I have the lists of the exam results for all the boys by class for nearly all the terms between1968 and 1973. This list also gives their ages, though not their Christian names, nor bizarrely the actual class names, the list merely has gaps in it every so often.
It means that I effectivelly have a school roll for a far longer period, as boys who were 13 in 1968 had joined the school in about 1963 and those that were 8 in 1973 did not leave until 1978.
I will scan the lists and mail them to Jonathan. I might also type them out and send them as the paper size looks like foolscap not A4 and it too long for a scanner.

Hi,
Coley was an English teacher - Hicks I do not remember!

Chris Coley was a teacher, who arrived after I left, so I never met him. R. Coley was a boy who was there for most of my time; I remember the name but not the face.

Ian Wallace was not in your year. He was head boy in my time in about 1969/70. There is a blurred photo of him from then in among the photos.

Ian W. was also Nancy in the 1969 production of Oliver and in the photo of the cast of Oliver he can be seen in a long brown wig standing to the left of Crinkles.

Graham Kirk was also there in my first year which makes him younger than your year group.

Hello John, thanks for your comments on Ian Wallace.

Graham Kirk remains a bit of a mystery. He arrived at the school in the first term of 1962, according to the Magazine; he befriended me soon after I arrived in the last term of 1963, which suggests to me that he was about my age; but his departure isn't recorded in the 1967 or 1968 Magazines. Perhaps he left right at the end of 1968? If he was my age, he stayed at the school unusually long.

And in my list of exam results his age is given as 13 years 10 months in July 1969. (And while Pain and Evans were the same age there was nobody older than that at the school. I assume that he would thus have been fourteen when he started at Public school that September. He was thus older than his contemporaries.)

I suggest that if his mother was the matron he may also have been able to start at the school when he was perhaps only 6 or 7 rather than 8.

Thanks, John. OK, it seems Graham Kirk was a year and a half younger than me, so I've taken him off this list and added him to the 1968/69 bunch.