John has provided the following photo of Oliver!, the school play in 1969, with Mr Cromie as Fagin. 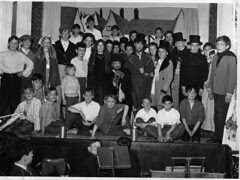 Oliver! was performed again in 1974, but rather oddly the 1974 Stouts Hill Magazine offers only a blurred photo and a brief incoherent article by a participant: no cast list and no review.

I remember this so well - Cromie took over because there were no suitable candidates -I had the role as the innkeeper and I remember Sykes was Andrew Needham!The rest has been lost in the fog of time.
Very pleased to have found this blog!

Hello Artful Dodger, thanks for dropping in.

I left in 1967, so I wasn't there. However, according to the 1969 Magazine, Joey Evans got measles, Nancy was played by Ian Wallace, and Stephen Fry was one of two Bow St Runners (as you say, a modest supporting role).