Anthony Cromie, known as Crinkles for some unknown reason, was a fairly young master and dangerously alert: the master mostly likely to materialize out of thin air and pounce on you.

I don't recall whether he ever taught me in class; but he was ever-present around the school. I also spent a short time (one or two terms?) in the dormitory located in his house, which Robert says was known as The Cottage.

Jonathan Marler thinks that Mr Cromie was already related to Mr Angus in some way before his marriage. Jonathan adds that he had “a good sense of humour and a certain charm”.

In his retirement letter to parents in July 1969 (copied to me by John), Mr Angus provided the following information about his successor as headmaster:

Anthony was educated at Wolborough Hill Preparatory School Newton Abbot and Sherborne School, Dorset, where he became Head boy and played Rugger for the 1st.XV and Hockey for the 1st.XI. He was called up for National Service, joined the Infantry and was commissioned in 1952 and later did two Overseas tours with the 1st.Battalion, the Devonshire Regiment - the first to North Africa at the time of the Negnib coup d'etat in Egypt and then saw action against the Mau Mau terrorists in the Aberdare forest in Kenya. He later went to Trinity College, Dublin, where he obtained a Second Class Honours degree in Modern History and Political Science.

Anthony is 36 years old, joined the School in 1955 and has had 10 years teaching experience. In 1960, he married my daughter, Susan, and they have a son, Andrew, and a daughter, Sarah.

Andrew Pike believes that Mr Cromie went on to work at the Old Ride School after Stouts Hill closed.

Anthony and Susan Cromie continued to live in Uley until about 2010.

In 2005 he published a slim volume of children's stories with attractive colour illustrations, called The Adventures of Jonathan Jackdaw. Copies were distributed at the 2009 Stouts Hill Reunion. 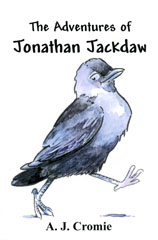 Anthony Cromie passed away peacefully at home on 21st February 2016, aged 83. He will be sadly missed by all the family and friends. A service will be held at Hereford Crematorium on Saturday 5th March at 10.45am followed by a Thanksgiving Service at New Life Church, Llandrindod Wells at 2pm. Any donations can be made to The Bracken Trust.

Mr Cromie, Crinkles, taught us French and English in 4b and 5b. He was a thinnish man with a moustache.

He could be cruel, I remember him holding my ear lobe between his thumb and forefinger whilst asking me questions, when my answers were not what he wanted to hear he would pinch!

But he had a generous side, one day he let me out of class to go and hunt for a terrepin that had gone missing (never found it) and another time he took a group of us to a local pond where he had released young trout for his passion, fishing.

I wrote to Mr Cromie in Uley and got a friendly reply today. He not only remembered me but accurately remembered several things about me, which I thought was pretty impressive after forty years and so many other boys passing through.

Unfortunately he's not a computer user.

"We are living quietly here -- getting on a bit and not in the best of health. I have to have the battery in my pacemaker replaced and so should be back to normal."

I was under the impression that Sue Angus and Anthony Cromie were cousins!
If Mrs Angus had been a Miss Sawdon, then may be Crink's mother had been a Miss Angus?
My father recognised Crinks when we turned up to visit the school and said he had last seen him when he, Crinks, was drunk under a table at his sister's wedding. (My half-sister and Crinks's sister were at college together after the war, and I think my father knew Crinks's father as well. My half-sister later married someone who had been at Sherborne with Crinks!)
And in my day he was Crinks not Crinkles.

I have just found this blog and have scanned the lists.
My entry is correct:
Christopher Ellis 1952-1957
Those leaving in 1957 or thereabouts, I can confirm Christopher Knight, Michael
Langley-Smith, Robert Marsland, Kenneth Merron, Richard Summers, Christopher Cliff. these are from my memory.
My E mail is cristobalellis@gmail.com and my website is www.lastoutpost.info/
Well done with compling all this.
Chris Ellis

He taught me French at Rose Hill School ( Stout's Hill School's sister school in Alderley ) after leaving Stout's Hill. I remember his occasional wily smile but more often than not remember him speaking through clenched teeth up close to me, fizzing and spitting with anger. What had I done?? Ironically would probably get on very well with him now, he was good friends with my mother Val whom worked at the school for a while. Uley is truly a gorgeous spot

I went back to the old school 4 weeks ago; good day fond memories overall, did not go in to house but grounds, the lay out looked no different, great location Good to see Chris Ellis on this blog.I I was their when Anthony Cromie started. Used to get stuck in to the day,s sport with rest of us fit man. Can,t remember his teaching.I guess I was just there to play games, they had other ideas.

Thanks to Mike and Jamie (and belatedly to Chris!) for dropping in. Mike, I've added you to the list of visitors!

Thanks Jonathan. I'm back on blog. Sent an em to Chris Ellis to see if he is still out there.
Thanks for your inf.