Robert Angus (known as Boss) was the headmaster of the school until 1969: a tall commanding figure who seemed so central to the school that he must have been there forever. Indeed, according to Nicholas Barton's history of Stouts Hill, Mr Angus founded the school in 1935, at the age of about 29. 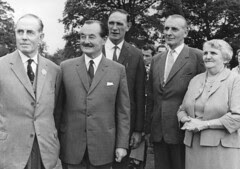 He ruled from his study, on the ground floor at the back of the school; an old-fashioned comfortable room that most boys visited only in order to be caned. With occasional exceptions, he was the only person in the school who wielded the cane, and so he had to spend a part of each day caning boys. He seemed to take no pleasure in it and presumably regarded it as a necessary chore. 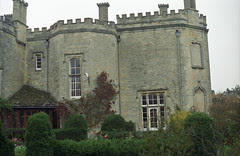 He taught maths to the 6th form, and did so rather efficiently, concentrating on geometry in particular. Strangely, although I later specialized in maths and took three different maths 'A' levels, I don't think I ever encountered the subject of geometry again after leaving Stouts Hill.

He was married to Joan, who seemed not at all well during my time at the school, and they had a collection of quite young and attractive daughters: Carol, Paddy, Sue, and Jane, in that order. I believe that some or all of the daughters were educated at the school, although girls weren't normally admitted.

I never had any idea that he was a poet. But apparently he wrote poetry throughout his life, and there is now a Web site devoted to his poetry, which also reveals that his MA from Cambridge was in English, and that he originally planned to be a writer, poet, or journalist.

He was a man of considerable dignity. On one occasion in the 6th form, he saw a large mug sitting on a shelf above his head. Feeling that it shouldn't be there, he reached up for it. What he didn't know was that someone was growing beans or sprouts in water in that mug. Assuming that it was empty, he up-ended it in the process of removing it, and neatly tipped the beans and the water over his own head.

He stood there dripping and we sat in silent shock, awaiting the explosion. But he took it well, and realized before saying anything that no boy had committed any crime: he had merely made an unsound assumption.

It was Mr Angus who advised my parents, knowing that they were short of money, to enter me for scholarship exams to four different public schools, in the hope that at least one of them would award me something. One of the headmasters of these schools sent my parents a nasty letter when he found out about this: he felt that it wasn't cricket to shop around for the best offer. I don't know whether my parents bothered to reply.

Mr Angus had good connections with several public schools, and some house masters at those schools sat on an advisory board for Stouts Hill. Notable among them was John Lewis of House Number 8 at Malvern, and a number of Stouts Hill students went to Malvern, including myself.

According to Nicholas Barton's book, Mr Angus died in 1985 and Mrs Angus in 1992. Subsequently the bungalow in the school grounds to which they moved in retirement was sold, and some alterations were made to it.

Mr Angus never taught the B stream, my only contact with him was in his study after lunch to be beaten.

You are right there was a daughter called Paddy who was a very active girl. I think she did a bit of teaching to 3B, maybe scripture? I think she got married to a master from another school and left.

Mr Cromie's wife Sue was a very pretty girl and the third daughter, maybe called Carol was a sort of matron.

Mr and Mrs Angus retired to a purpose built bangalow in the grounds and I remember them being very pleasant people. They are both dead now, and I think there is a memorial plaque to them on the gates to Uley cemetry.
Paddy married Ian Scott-Clarke and whilst I was there they were deputy Headmaster/ mistress. Paddy was my teacher when I started in '74 and was very patient. As far as I'm aware they still live in their cottage in the grounds. Sue and Anthony Cromie live in the village.
Alan Davis

I remember Mr Angus when I first entered the school as a nine year old boy in michaelmas term 1946.

Mr and Mrs Angus were a kindly couple,who always made me feel at home as I had never been away from home before.In particular Joan Angus was always interested in the boys welfare ,and I found her easy to talk to when I had any concerns or worries ,as I was a very sensitive boy.

Mr Angus was rarely seen in the classrooms as he seemed just to teach in the 6th form.Being a tall man he always had an air of authority naturally so being the head master, and no one spoke out of turn when he was around.He did give me a dressing down when i got in a fight with another boy.But spared me the cane for which i was gratful!

The headmaster Mr Angus had not long been back from the war I gathered, as the school was somewhat basic since there was still cloths rationing after the war.

As a matter of interest ,in 1946
the school consisted of first and second forms,situated near the old rose garden, and swimming pool,
then there was forms three, four, remove,shell, then the sixth form situated just off the pantry room.

There were the dormitories namely
"Pink" dorm as we called it, over the drawing room,"Green" dorm over the great hall of the mansion. "Green" dorm was a long room overlooking the front lawn. "Blue" dorm next to "green" then "Tapestry "and a nursery type dormatory for the youngest boys.Next to sick room.

There was a block known as "New" dorm
built in brick over the classrooms at the front of the property overlooking the approach driveway.
to get to the "New" dorm you had to go through the old gallery dining room. When Ii was older I moved to Beech house dormitory in the village Mr Kemp's house a comfortable old house typical village house with a big garden at the rear.This dorm was situated on the first floor of Beech house,with matrons rooms just down a flight of steps. bathrooms and toilets on ground floor.

in order to get to Beech house. I was great in the summer walking through the village in an evening under a starlit sky. But cold in the winter.

Mrs Angus always made sure that we had delicous cakes for our meals on special occasions ,like a boys birthday for instance.But the meals were always overseen by her.

As far as I know the Angus's were of Scottish origins. A Scottish school friend of mine confirmed this.

Thanks, David. Yes, I remember the bathrooms and toilets downstairs at Beech House.

I think Mrs Angus was less involved with the school by my time, and had given up overseeing meals, though as usual my memory could be at fault.

I get the impression from the Barton book that Mr Angus was released from the Army long before the end of the war, though he may have continued with the Home Guard until 1945.

Daughter Jane was a sort of matron. I've also a photo of Jane and Boss in a carriage as they left the school on their way to Jane's wedding in about 1973. Jane was a great swimmer and lovely in a swimsuit too. Jane blushed very readily e.g. if she noticed that you had noticed that she looked lovely in a swim suit.
We were told that Carol was an air stewardess.
Paddy taught me art. (I assumne it is actually Patricia) She was married to Ian Scott-Clarke, who taught at The Old Ride and then took over as deputy when Crinks became Head. They had a son Kim. Ian had supposedly palyed for the London-Irish.
And as for Sue Cromie. I though she was terrific, in very many senses. Was the idea that the school would run well if she and crinks did a bad cop good cop routine, or did she just have a soft spot for me and kept an eye on me after I'd been ill with stuff like meningitis. For heaven's sake she taught me to dance the Charleston for Salad Days!
John M.

Clearly being a bit older than the other contributors, I joined Stouts Hill in 1954 and remember Mr Cromie just seemed to arrive to teach soon after I joined. He had a beautiful MG sports Car, which ended up being dismantled in Mr. Mills - the carpentry teacher's workshop; five minutes silence at the MG Club, please - anyway, there was a little alliterative "jingle" amongst teh boys that went "Crincky, crankie cronckey, Cromie's cromium-plated cronk". Don't know who came up with it, but it obviously stayed as a nick-name even though he left some time after to go to university.

Carol was a trained nurse and good fun. Susan was, I seem to remember, the academically gifted one. Paddy was, I think a trained teacher and liked to play tennis. I remember her teaching me how to hold a tennis racket properly. I believe Jane was the one, who struggled - like many of us - academically as I think did Carol.

Mr Angus was an accomplished sportsman having been a soccer blue was good at cricket and tennis. Joan Angus was not an athlete - dare one be rude and say very flat-footed.

The person I regret we do not see any comments on is Mr. Kemp. Even now, more than fifty years later, I still remember him teaching cricket and those unbeatable elevens he created. Just last week, watching the Aussies playing the Windies in a limited overs match as some one was caught behind
Mr Kemp shouting "never slash at a rising ball outside the off stump".

Thanks for the anonymous comment, though it would be nice to add your name so that we know who you are!

There is a page here about Mr Kemp. I suggest referring to the overall map.