David Woods was known as Peck, Pecker, or Pecker Bird — because of Woody Woodpecker, of course, not because of any personal characteristics.

He was a keen young man who taught Latin to the younger boys, invented educational games to be played in class, and organized voluntary sports out of class. 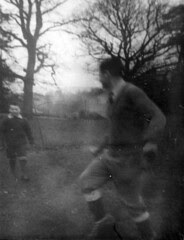 Jonathan Marler remembers that he taught Greek as well as Latin.

He was interested in photography, and developed and printed photos himself in a darkroom at the school. 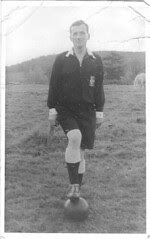 I must admit I had a brief urge to caption the above photo “Pecker has only got one ball”; surely I can't be entering my second childhood already?

Mr Woods taught us Latin in 3B. He always reduced everything to football which was his passion; for instance we had this game of latin football where the class was divided into two teams, one side was always Spurs. The boys had to ask the opposite team the meaning of Latin words to move the ball forward. I always found football boring!

Pecker also was the one who took orders for purchases from the shops. Mostly these were airfix models which we bought with our pocket money and osmoroid pens for 8/6d.

I remember him well. I have a number of photos of him taking what I guess is the camera club out on walks in the area, as well as one of him posing in his full referees kit, and one which is the pair of the ine shown on the blog.

I used to order things from the shops in Dursley from him, my pocket money fund allowing. I was thinking I had 10/- a term, but if airfix was 8/6d, I may be wrong.

I was taught Latin by him, aged 7 and 8, which I hated then, but still remains with me! I did win a bag of sweets for my prowess at Latin aged 11 at grammar school, having had the advantage of three years of it at an early age. Someone also tried to teach me Greek, with less success!

Like most of the other teachers there, he scared me at the time, but looking back with nostalgia, he must have been a decent enough bloke, and his shopping trips and photography outings certainly made my life happier.

I remember David Woods as well, though with no fondness. I can still forge his signature which l did from time to time to keep myself and others out of trouble.

The football, the ruler, the slaps, the detentions. Once in 5A a guy called Davis threw all his books at Woods in frustration and anger I seem to remember. Davis spoke for me at the time.

I look forward to the reunion as I am certain many of my memories are 'hazy'. I would be very interested to hear other's memories of 'Pecker'.

Hm, I don't find any record of a guy called Davis in that period, but perhaps Bill Davies, C. Davies, or Howell Davies.

I remember him well, he taught me latin in 3a and I remember the latin football well. I also bought my first camera through him, he used to develop the photo's himself.

He was also the 3rd game cricket master and kept scores and records of all the games played. I managed to top the bowling record with 9 for 4.

My opinion of him and looking back now was that he was a truly dedicated teacher and i believe a great loss for the school when he left.