I must admit I'd almost forgotten Michael Quick, who I think taught the younger boys. He was known as Inky, perhaps because of the Parker Quink fountain pen ink that I think was in common use at the time. 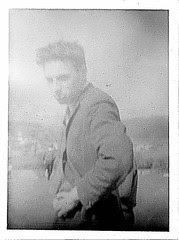 The 1966 Stouts Hill Magazine reveals that he taught at the school for five years, from 1961 to 1966; so he was no longer there in my final year. The 1967 Magazine reports that he was enjoying teaching older boys at Dover Grammar School.

I remember him as a youngish, thin man who taught us History in 3B. He was very good at drawing diagrams of how the infantry and cavalry were deployed in the civil war, and Simon De Montfort and all that stuff.

I remember him as short and bad tempered. I think he fancied himself as an athlete - I think he was big on soccer.

I certainly remember him as bad tempered, and I have a feeling he was known as "Inky". I have forwarded on a rather poor photo to Jonathan, which he might be able to use.