The library was at the foot of one of the corner towers, on the left of the main building in the photo below. 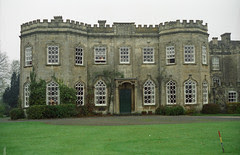 A rather elegant round room with plenty of windows, it contained quite a varied collection of books — all fiction, as far as I remember — in shelves underneath the windows. It also contained (rather oddly) a grand piano and a cheap record player with a few records. There were records by the Beatles (Rubber Soul), the Rolling Stones (Big Hits: High Tide and Green Grass), the Monkees (More of the Monkees), and the Animals (The Most of the Animals).

The room had a highly polished wooden floor. We discovered that, if we sat on the floor and rotated with our legs extended, then pulled our feet in towards the centre, we rotated rather fast on our bottoms. This was quite fun as an occasional diversion.

I liked reading and spent a lot of time in the library. It was generally peaceful because I was often the only one there. Sometimes Mr Sawdon came in and played the piano, but that wasn't a problem.

Of course, piano lessons were also conducted in the library. My mother wanted me to have piano lessons, but I had no interest in playing music at the time, and went through the motions mechanically. Later, in my mid-teens, I taught myself to play the guitar badly, as many people did in those years.